It’s the trick of the mind that makes you think there’s someone hiding in the darkness, the monster under your bed, the stranger’s footsteps echoing too close behind in the street at night…

Collectively it’s the enemy, the criminals we want to lock up, the rapists, sadists, murderers. It’s the incest inflictors, child abductors, perpetrators, pedophiles, predators. It’s the tragedies, the atrocities of war, the suicide-bombers, fanatics and shopping-mall shooters. It’s the foreigners, the Other, the people who look different: strange eyes, unusual skin colour, funny accents.  The shadow might be feminism, if you’re threatened by the idea of strong women or of equality. It might be gay people, they might disgust you if you’re afraid of your own queerness, of the queerness of being human.  It might be right-wing politics or bible-bashing gay-hating church groups. It might be drugs if you’re too scared to understand them.  The shadow is in fairy tales: the bad guy, super-villains  the evil step-mother, the dark sorcerer. In Disney he often has darker skin, she is ugly and wears dark clothes, he has a foreign accent. The shadow is always powerful and yet somehow defeated by sheer naive innocence, by love, by faith. If only it were that simple. 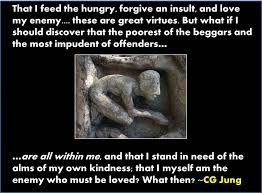 The shadow is always on the news, sometimes as a person, a religion, a regime, sometimes as a tornado, an earthquake, a hurricane, a cyclone, a volcano, a flood. It unites us in our shared enemy, reassuring us that we are right, alright, okay. All we need to do is rescue our kind, lock up the bad guys, recover from the trauma. Maybe we can lobby for legislation change: harsher sentences, ban something in case our young are captured by it.  The shadow is in “rape culture”, it is violent culture, and yet we refuse to see the connection between socially acceptable violence and rape. Rape is sexual violence. Violence is abuse of power. How much more obvious does the connection need to be. Those violent video-games and movies are just playing out the same tired dance with the shadow because we are still too afraid to face it.

The shadow is the hardest thing to face, both in society and in ourselves. We don’t want criminals to be human, we don’t want them to be vulnerable, to be victims of circumstance, to have dreams or loving mothers; we want them to be vile, irredeemable, evil. We don’t want the evil step-mother, the warlock or the super-villain to be generous, to be kind, to shed a tear. When they do it’s always too late. They must be sacrificed, presumably at their own sword. We want to believe that evil devours itself in the end so that we don’t have to face it ourselves.  We want things to be simple, not complicated. We don’t want to see their humanity because, more than anything, we don’t want to see them in ourselves.  But really, we are the villains as well as the heroes, we all have the potential to do horrendous things, we have all had moments of frightening ourselves in rage – out of pain, fear, jealousy – of fearing our own potential to inflict harm and of inflicting harm deliberately. Even the monster under the bed is part of us, part of our minds. Unless we face this in ourselves personally and publicly, we will forever be walking faster and faster down the street at night, running from our own shadow.

Personally, my shadow is my guilt – of doing something wrong, having done wrong. It’s my shame of being wrong, not good enough.  In my childhood it was personified by my step-father, and he in-turn (or first) projected his shadow onto me. I was never good enough, spoilt, selfish brat, little shit, stupid, lazy, all the things I was called as a kid, the judgements I fear, naive, foolish, weak, victim, and deeper still: evil, malicious, defective.  It’s everything I’ve ever done ‘wrong’, every nasty urge I’ve ever had., every lie, every deception.  It lurks behind every bath-pearl stolen from a pharmacy when I was twelve, every bill or coin snatched from the purses and wallets of relatives when I was 13, every drop of spirits pinched from mum’s liquor cabinet when I was 15 and every biscuit taken from the kitchen at night when I was 8. I can feel it rotting inside me like the crumbs left in my bed: sneaking, devious, filthy, part of me. It’s every fear, terror, insecurity, being shamed-out, bad, dumb, losing control, being powerless.  It hides in my difference and in my sameness. 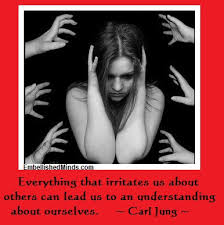 My shadow has hindered me, forced me to stick to the safe path, to protect myself, to find my tribe and stick closely to people who understand me, who agree with me, who I can relate to.  It has taught me to avoid situations that make me uncomfortable – like groups of macho men and male dominated spaces; mechanics workshops, some music stores.  It has taught me to moderate my behavior to suit the people I am talking to, so I don’t swing into full feminist critique in front of the bigoted dad of a friend. I can sniff out danger. My mother always taught me to avoid creepy men and I am not at all attracted to predators, but this shadow has made it difficult for me to trust men in general. Some of the most dangerous people I have known have been women and were once close friends.  I have learnt to cut these people out of my life. Some things are too scary to face and impossible to change.  I will keep delving into my shadow, walking through the dark, swimming through unconsciousness because I’m too scared not to. As Carl Jung said, “When an inner situation is not made conscious it appears outside of you as fate.” I don’t wast to take that risk. I don’t know what’s luring in the murky depths, but I’d certainly rather deal with it internally than allow it to manifest externally.