Warning: this post starts out all serious-like and gets more quirky later on. 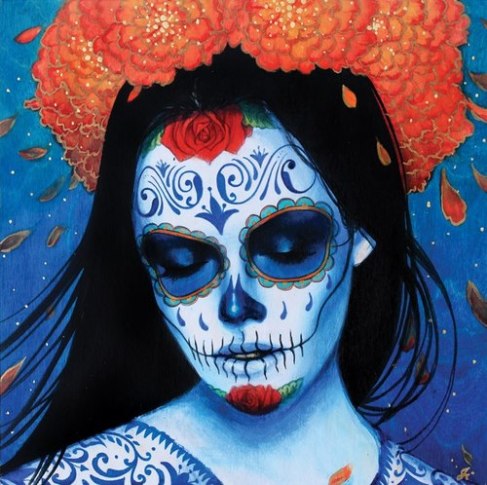 Over the past few months I have been very slowly reading, re-reading and digesting Women Who Run With the Wolves by Clarissa Pinkola  Estés. I think if I had picked this book up earlier in my life it would have gone over my head or I would have gotten frustrated with it but this is just the right time. For me the Jungian archetypes combined with mythology weave a transformative spell powerful enough to shift old patterns and resolve deep traumas. The following is my re-interpretation of one of the stories  Estés tells.

This is the story of the skeleton woman, an Inuit legend:

A long time ago she was thrown from a cliff by her father.  No one remembers exactly why, but she was plunged into the ocean and there she remained, tangled in seaweed, her hair floating, her flesh being eaten away by the creatures of the sea.  One day a fisherman, unaware that the area was said to be haunted, came along in his little boat.  His hook caught hold in her diaphragm.  Thinking that he had hooked a really big one he began to tug.  The ocean rippled and seethed and, after a long struggle, the skeleton woman was freed.  The fisherman did not see her terrifying skeletal form rise up from the water, he had turned away to fetch his net, but the shock when he turned back around! He began to paddle frantically away, unaware that she was tangled in his line, and all the way home she followed him, right into his snow house. It wasn’t until he lit his oil lamp that he saw her, and while still terrified, something softened in him; perhaps it was the lamp light, perhaps his own loneliness.  He began to untangle her and as he did he sang a lulling song. She didn’t dare move.  When the work was done he covered her in furs and, exhausted, went straight to bed. In his sleep he cried a solitary tear of loneliness and the skeleton woman was overcome with the thirst of it.  She drank of the tear, of the oceans of loneliness, and quenched her thirst, then she reached into the fisherman’s rib-cage and took out his heart.  She drummed the heart and drummed flesh back over her bones, creating herself anew, then she slipped into bed beside him.  In the morning they went away; some say they went back to the ocean and were fed by the creatures of the sea that the skeleton woman had known.

This is a story of transformation (Pluto/Scoprio), of relationship (Libra/Venus) and of healing (Chiron/Virgo).  This is the story of the victim, flung from the cliffs by her father, and the unwitting rescuer.  The victim is an archetype I have been working with a lot lately.  It is hard to think of myself as a victim because I don’t want to be weak, but I’m trying to process childhood trauma and what else can a traumatised child be but a victim? According to Carolyn Myss everyone has four key archetypes: The child, the victim, the prostitute and the saboteur and each is a guardian of something.  The child is the guardian of innocence while the victim is the guardian of healthy boundaries.  This story explores and re-negotiates boundaries between two aspects of the self allowing for healthier boundaries with the outside world.  I also have quite a strong rescuer complex, so I can relate to this story both externally in terms of relationship, as the author does, and internally with my own rescuer animus.

I have become so aware of the skeleton woman at the bottom of the cliff; the innocent, yet terrifying, wounded, victimised part of my psyche.  I am less aware of the fisherman.  I don’t have much idea of what a healthy animus looks like having few male role-models in my life.  My father was someone I was once a year in my childhood and my step-father might as well have thrown me off a cliff psychologically.  So I was thinking about the key attributes a healthy male-part-of-my-psyche might have: strength, compassion, health and presence (as in: actually there).  I also think he might look like Johnny Depp. Just saying.

So I went through a deep meditative exercise; on one level I looked at the things going on in my life externally at the moment (which are private – don’t be nosy), on a second level I imagined the plain old victim and rescuer archetypes sitting down at a table in the house of my psyche and on a third level, I played out the skeleton woman story with Johnny Depp cast as the fisherman.  I think it would make a great screen-play.

I could feel my inner skeleton woman, lurking in the depths, corroded by fear (or fish?), alone, abandoned  afraid and utterly terrifying.  I watched see the rather attractive fisherman approach, he thinks he’s hooked a big one – just as most people do right at the start of a relationship with their elaborate infatuative fantasies.  The tussle that proceeds is largely carried out unconsciously – under the water – and it isn’t until the struggle is over that Depp realises he has bitten off more than he can chew.  His excitement about the fish was just the tip of the iceberg of ‘Ahhhh!’ and he runs screaming.

Meanwhile the rescuer archetype (also Depp like) has swaggered in towards the table and is facing the victim, his other half.  The victim looks sullen  she is young, her eyes are sunken and downcast: hopeless, helpless, pathetic. They don’t know what they’re getting themselves into but there is a sickening anticipation – excitement and fear.  They are each other’s compliment, opposite, other-half.  They are like yin and yang and out of balance it’s just a weird grey mess.  I don’t know why the rescuer archetype is so frightened of her.  Maybe it’s the responsibility of the life-saver over the saved life, maybe he’s just afraid of commitment, maybe it’s that weird fishy smell.  The victim archetype is terrifying because she is terrified, because fear has eaten away all the nice juicy fleshy parts of her and all that is left is the skeleton in her closet, the hidden terror of not being good enough or of being bad.

Somewhere along the line both Depps see something worth saving and the untangling process begins.  For the archetypes at the table, this is a process of working out fear and the beginnings of the mingling of the two opposites. As Estés states, every step of the process is important – you cant’s skip the untangling and jump straight into bed with your handsome rescuer – that is fantasy – it’s not sensible at all.  Untangling isn’t just foreplay either, it’s painful it’s facing up to the past and becoming more self aware and it’s being exposed to someone else – that is what intimacy will do to you.  Untangling is being vulnerable and still and allowing the rescuer archetype to do his work – the story in relationships is usually different, there is usually much more re-tangling and holding onto the line, there is a fear of being exposed and being vulnerable and holds the process back.  Untangling, like childbirth, is a surrendering process.  After the work is done and the baby is born, she is wrapped, as the skeleton woman is wrapped in furs.  It is time for rest.  That is how you can tell your own untangling is done, the victim is quiet.  She stops sobbing at the table and pleading, she is still and calm, her anguish is gone but she is thirsty.

The drinking of the tear is the first active thing the skeleton woman does (in my version of the story, anyway).   She is helping herself, finally.  The victim is no-longer pathetic and helpless. She is asking for what she needs or taking it when she finds it.  She is quenched, emotionally by the loneliness of her rescuer – she has found the black spot in his white half of the ying-yang.  She has found herself in him, just as he saw something worth saving in the lamp-light.  This gives her the strength to take his heart and heal herself – for we all must save ourselves in the end – even the victim.  She is now an active agent, re-building her body, letting go of her fear.  The victim at the table has grown, she is glowing, she is aware of her past but no-longer trapped in it.  The movement, the drumming the dance of this is important.  Movement and healing are always related.  She dances herself into beauty, into confidence.  She has taken back what her father stripped from her.  Then it’s time for bed.

The mingling of the two archetypes is also a dance – a partner dance.  It is the ying and yang fish swimming together around and around, it is the coming together of the two disparate fragments of the same whole, the completion of the journey of healing and the creation of new freedom.  The two archetypes can now leave hand-in-hand and return to the waters of the subconscious where they are fed by the same fish that used to eat away at the skeleton woman and evade the fisherman.